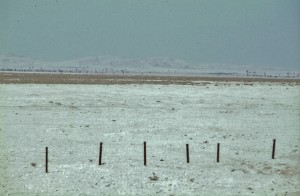 Fence marking Mine field – from Mine field side
The line of posts marked one of the many mine fields laid in the war, it’s taken from the mine field side we had to get some leveling done along some cleared lines..at least we were told they were cleared.
Mac (Roy) told us he had worked there years earlier and some of his helpers had lit a camp fire, unfortunately it was on top of a mine (unmarked) it exploded causing injuries.