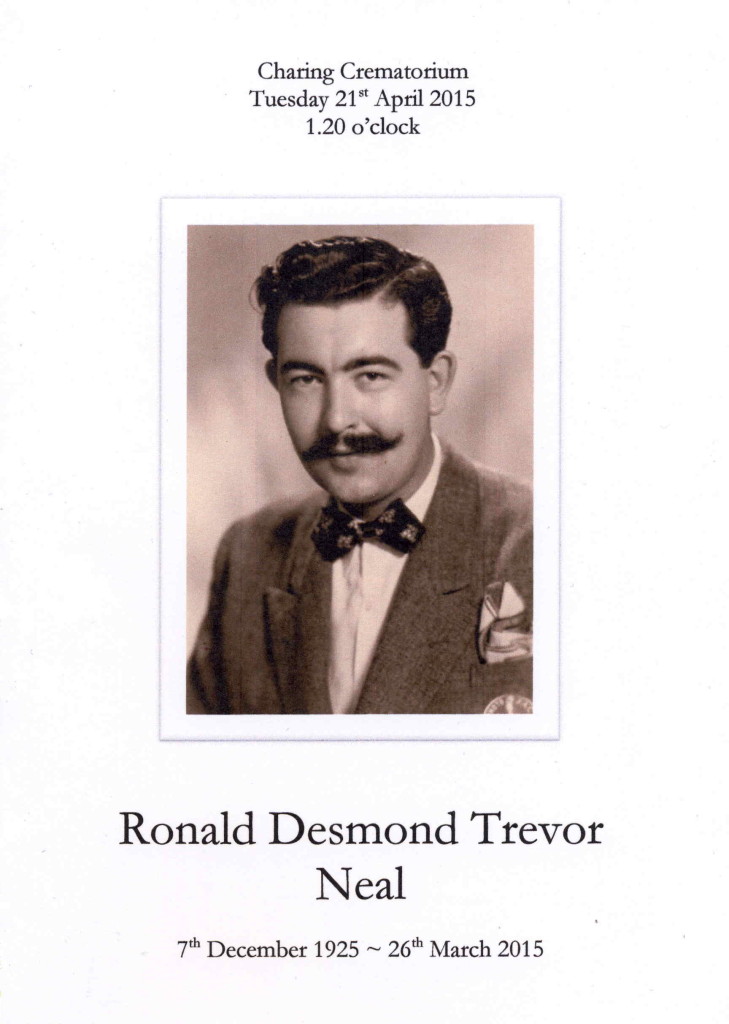 The funeral service for Ron Neal was held on 21st April 2015.  It was attended by his widow Sylvia, family, friends and neighbours, and a number of old colleagues from Fairey Surveys, including Geoff Milsom, Bob Berris and Ken and Jean Fostekew.  It is hoped that it can be arranged for Ron’s ashes to scattered on White Waltham airfield a bit later in the summer.

Ken Fostekew has given us this brief obituary:

Ron was a 16 year old ATC Cadet attached to the Air Transport Auxiliary (ATA), along with Don Ellis.  Ron had some memorable flights with the ATA and was full of yarns. He flew with Jim Mollison to Hulavington in a Ventura and had to crawl into the tail to release the tailwheel as it had jammed, and for that Jim treated Ron to a slap up lunch in the mess.  On another occasion Ron and another cadet went to Scotland with Gerard d’Erlanger in a PBY Catalina flying boat for mooring training.  At the end of each session both boys were soaked to the skin, and d’Erlanger gave them each £1 for their supper and a trip to the cinema. Ron also flew with Lettice Curtis and Joan Hughes, pioneering ATA women pilots, in Halifaxes, Lancasters etc.

Ron obtained his PPL and was a founder member of the embryo Fairey Aviation Flying Club at White Waltham.  After his many years as a pilot with Fairey Surveys, redundancy happened, as it did with many of us.  Ron then moved to Lydd in Kent and flew with a company photographing shipping in the channel (possibly for US Naval Intelligence) until retirement age at 65.  His last years were spent house bound and then bed ridden.
.
If anyone has any special memories or stories about Ron Neal, we would be happy to add them to this page to share with the FSL community.  Contact us at admin@faireysurveys.co.uk.