Adrian Workman sent in this photo of some familiar faces at the West London Aero Club monthly gathering.  Summer 2012?

Attached is a photograph from the recent get together in White Waltham, courtesy of Graham Bridges and John Tompkins.  The message is for Bob Purcell, who couldn’t be there.  Click on the photo for a full size picture.

Geoff Milsom, former Chief Pilot, has drawn up a list of pilots who worked for Fairey Air Surveys, Fairey Surveys and Clyde Surveys during his time.

This list is not necessarily comprehensive.  Any omissions or corrections would be gratefully received, along with any other information on the pilots themselves.  For example: Desmond Plunkett was one of the wartime RAF officers portrayed in the film ‘Great Escape’ (see article under ‘Personnel’), and Paul Heimes flew Spitfires in the Battle of Britain.

This article was published in the Daily Express when Desmond Plunkett, one of the Fairey Surveys pilots, died in 2002.  He was one of the RAF prisoners of war immortalised in the file ‘The Great Escape’.

Derek Minter starts this post off with his old employment letters.  Does anyone have any other interesting bits and pieces to add?  All contributions gratefully received – use the Contact form to let us know if you have anything, and we’ll be in touch.  We don’t have to post names …

The staff photograph outside the office in Reform Road was taken after the takeover by Clyde, about 1979.  At one of the White Waltham reunions a few years ago, everyone was asked to fill in all the names they could remember.  There are still gaps, so if you can fill them in, please let us know. 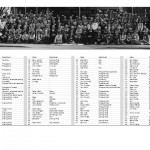 Photos of Fairey Surveys employees, then and now …